The early part of the pedigree is broken into three distinct sections:

The first-known ancestors of the modern Marris family were Adelolf de Marč (de Marck, de Merc, etc.) and his father Otbert. It was Adelolf who fought at the Battle of Hastings in 1066, after which both he and his father were granted lands previously occupied by the defeated Saxons.

The Marris pedigree was accepted by the Ulster Herald in 1938 and registered with the College of Arms shortly afterwards. It was later published in the 1952 edition of Burke’s Landed Gentry. In the introduction to that edition, the then editor L. G. Pine, in a special article on “English Pedigrees” (pp. xl – xli), wrote:

“Before leaving this subject of alleged Norman descent, it may be of interest to give those names which are known to us from contemporary or near contemporary documents, of persons who actually accompanied William in 1066, and were present at Hastings. This list is drawn from a lecture given on 10th May, 1944, by Geoffrey H. White, to the Society of Genealogists and printed in their magazine. The list is interesting as showing the names of Companions of the Conqueror which scholars have been able to find . . . The list was not put forward by the authors (nor by me now) as unalterable. It is possible that it can be extended, but the fact remains that only 25 names are given derived from these reliable sources ….”

“To this list I would add the name of Adelolf de Merc [sic], ancestor of the Marris family in the present edition. Details regarding Adelolf can be read in “The Lords of Ardres” by J. H. Round (Feudal England (1909), p. 462).”

1. Otbert de Marč
Otbert was the father of Adelolf below. Otbert received estates in Northamptonshire and probably Buckinghamshire. Some 35 years after Domesday in 1086, the Northamptonshire Survey (c. 1120) shows Otbert having been succeeded by his son Adelolf.

2. Adelolf de Marč
Adelolf de Merc was a Domesday tenant of Eustace, Count of Boulogne. After the Battle of Hastings, Adelolf received numerous manors in Essex and other places (see Domesday Book).

References to the above Domesday tenants 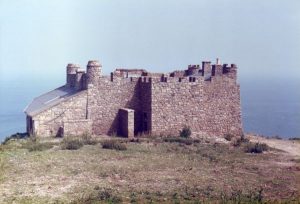 The line then continues through ten generations of the Marisco family of Somerset, Lundy Island and Ireland. Above is all that survives of Marisco Castle on Lundy Island in the Bristol Channel. The castle originally occupied two acres at the extreme south of the island, and was surrounded by a stone wall, with ditch, except along the cliff edge, which overlooked an almost perpendicular drop. The Castle Keep (pictured) has walls nine feet thick. The author of this website and his wife stayed in the Castle Keep and can confirm the thickness of the walls and the absolute silence from inside even during the most wildest of gales screaming up the Bristol Channel.

Pedigree
Full details of the Marisco generations will be found in the references given at the end of this article.

Below are the key points concerning the Marisco generations.

10.1 Herbert de Marisco or de Marreys, b. 1276 at Pollrone Co. Kilkenny, of Huntspill, Camely, Weyperous, d. 1326-7. He sat in the Parliament of 1296 as a Baron. He married (before 1306) and had issue (1) Sibilla, dau. & co. heiress of Walter de la Haye, Escheator of Ireland. He in addition to his Irish lands held of William de Fortibus, sometime Earl of Albemarle 1/8 part of a Knight’s fee at Kyrmington (modern Kirmington, nr. Gt. Grimsby) Co. Lincs, married (2) by 1316, Isabella, dau of Sir Henry de Tracey of Woolcombe, widow of Sir Simon Roges of Porlock. She m. (III) Edmund le Botilier, probably younger brother of James, Earl of Ormond (both alive 1350 A.D.).

References to the above Marisco generations

– Chanter J. R. History of Lundy Island. Reprinted from Transactions of the Devonshire Association for the Advancement of Science, Literature and the Arts (1871).

– Pedigree of Marris, Marreys, de Marreys originally de Marisco of Huntspill, Somerset, of Pollrone, Co. Kilkenny …… of Croxton and Holland both in Co. Lincoln, c.1066 — 1948. Stored at (and available from) National Library of Ireland. Ref: GO MS 175 pp. 501-14. [this is the pedigree accepted in 1940 by Thomas Sadleir, Deputy Ulster King of Arms, Dublin Castle. Sadleir continued to update the early parts of the pedigree during the 1940s.]

– Ternstrom, Myrtle. The de Marisco family of Lundy, printed in Transactions of the Devonshire Association for the Advancement of Science, Literature and the Arts. Vol 139 (2007), pp. 41-68.

(Only the main line of descent is shown in this section.)

References to the above early Lincolnshire generations